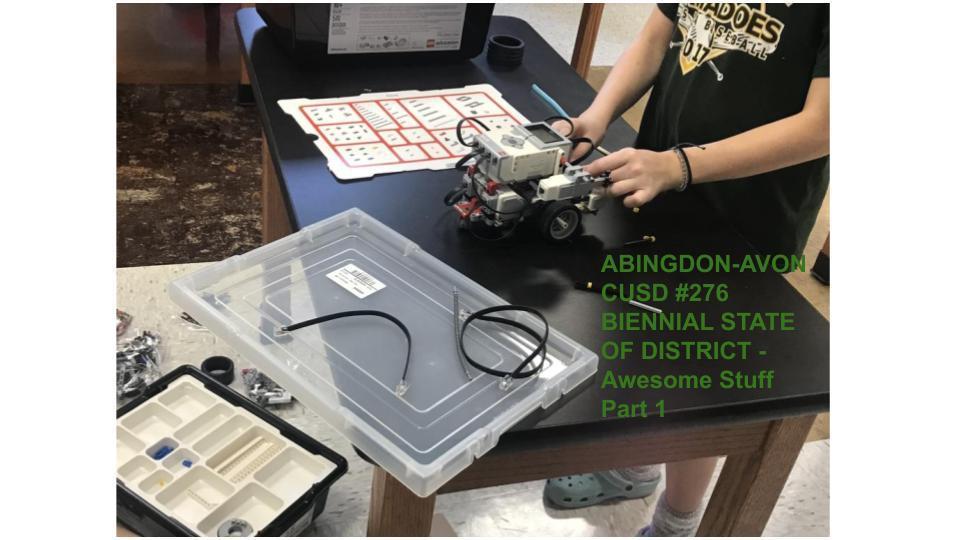 I wanted to share a two year update on the State of the District. Included in this thread over the next week, you will find district data, financial information, and stories about some of the great things happening in our buildings.

Playing with LEGOs is a childhood pastime that so many of us can fondly relate to. Transforming LEGOs into robots and learning how to code and program them is a whole new ballgame, and this summer, 10 A-Town students got to participate in Robot Camp to experience this first hand!

LEGO Mindstorms is a product that includes some of the recognizable, iconic LEGO pieces but includes a different type of beam and post system for more structural building. It also includes a small Linux-based computer brick and a series of motors and sensors that can be configured and programmed in multiple ways. This system is the technology that is used for the international FIRST LEGO League competition season that starts in the fall and will, hopefully, include an A-Town team this year.

During Robot Camp week, students first had to build a basic, rolling robot and then learn how to program it for simple movements (forward, back, turn). Then, they learned about the sensors and how to make the robot recognize and react to different colors or light. Once they had the basics, they got to race their robots against each other, experience robot sumo wrestling and, finally, compete in a mock LEGO League challenge, which, of course, involved some pretty amazing LEGO trophies.

Overall, it was a very challenging and exciting week for all involved!  Paul Bierdeman, retired Caterpillar engineer and LEGO expert, has been doing these types of camps and coaching LEGO League teams for many years and was incredibly gracious to put this on for us this year. Many others from the community also volunteered to mentor students for this program.  What it really all comes down to, though, are the core values: discovery, invention, innovation, inclusion, teamwork and fun! Both the students and adults learned leaps and bounds at Robot Camp this week, and, hopefully, will continue to move forward with these core values in the future.

Now we have started a Lego League Robotics Team at the Middle School!!!

District 276 will have a full-time Kindergarten through 5th grade Makerspace/S.T.E.M. (Science, Technology, Engineering & Mathematics) teacher at Hedding and Avon Elementary School. S.T.E.M. education allows students to investigate, problem solve, and make real world connections through the use of hands on scientific exploration and engineering design to solve real-world problems. We are very excited about this curricular enhancement and are already getting things prepared for the upcoming year! The new program will include, but not be limited to: the use of many technology-based tools such as LittleBits (circuitry and coding), Spheros (coding), 3-D printing(design), and Lego Mindstorm (robotics).  80% of our students’ future careers will include some aspect of S.T.E.M. skills and knowledge. The district’s goal is to help prepare our students for an ever-changing world.

During the 2018-2019 school year, the Abingdon-Avon Middle School was able to create a schedule which allowed for every student to participate in a S.T.E.M. class as a part of their specials.  S.T.E.M. is a curriculum which educates students in four specific disciplines — science, technology, engineering and mathematics. S.T.E.M. projects allow students to create and build problem-solving skills in a meaningful way.  All three grade levels were taught by Ms. Courson. She designed various activities that allowed for students to use their creative thinking and problem solving skills. For example, the students made stop-motion animation films, learned to code Spheros, solved everyday problems by designing solutions, and built working Mars Rover models.

A-Town is excited to be able to add this opportunity for our Middle School students, and we plan to continue expanding the program.  Our goal is to prepare students for a career in the 21st century workplace, and we hope that S.T.E.M. learning opportunities will do that for our students.